Image Size: 24 x 36. Original Oil Painting on Canvas. Shown Framed in dark brown, hand-finished, Leather Frame made in Peru. There are additional frame options that you can choose separately.

Bold colors in a traditional scene, modernized with the viewing angle. Bacci is a realistic artist whose work is evolving into the transitional sphere that will give a pop of color to the more modern home. 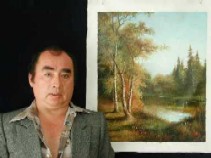