Ornate chair, insects and a hornbill bird perched upon a beautiful girl.  Who gets the apple? The surrealist, yet realistic musings in an elegant setting.

CV Art and Frame has access to a comprehensive collection of work by this artist. For additional details, or to choose alternate frames, please contact CV Art and Frame at phone #: 317-873-2976 or email: info@cvartandframe.com 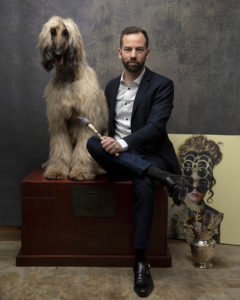 Carlos Gamez de Francisco was born in post-revolutionary Cuba in 1987, to a Cuban-Spanish mother and a Cuban-American father. He grew up in Holguin, Cuba and was  educated in an academic style heavily influenced by the Russian Academy. At age five, he determined, with absolute certainty, that he would be an artist. By the time he was fifteen, Gamez de Francisco was diligently painting eight hours a day, every day. Today, he often spends 15 hours a day painting and feels “very blessed to do what I love.”

Having resided in Kentucky, horses became a favorite theme for Gamez de Francisco. In surrealist fashion, he combines horses with the human form, centaur-like, but in reverse – the horse’s head with a human body. Or, maybe the head of a deer, a fox, a giraffe . . . and don’t be surprised if the body is that of a beautiful woman attired in silk and finery.

2006 “The Hole of the Mirror”. Ibero-American House, Holguín, Cuba

2012 Key to the City of Louisville by Mayor Greg Fischer, Louisville, KY