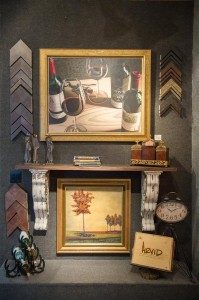 CV Art and Frame is your Fine Art Gallery and your single resource for all styles of art and picture framing.  We provide you with the best available products within your budget, perfect design options and top quality craftsmanship by Certified Picture Framers. If you want to buy art or have your picture framed, you have come to the right online art gallery and we welcome you to visit us in person in Zionsville, Indiana. We are located in the greater Indianapolis area, bordering Northwest Indianapolis, Carmel to the East, Westfield to the Northeast, Brownsburg to the Southwest, Lebanon to the Northwest and Whitestown to the North.

Art genres incorporating original, traditional, contemporary, impressionist, abstract and photographic styles can all be found within our art gallery offerings, including custom commissions.  We feature revolving original exhibitions by local, national and international artists while finding the specific art that you are seeking in all the various forms. In addition to original paintings, you will find art prints, sculpture, etchings, serigraphs and lithographs.  Find products within your budget, perfect design options and top quality craftsmanship by Professional Picture Framers Association (PPFA). Certified Picture Framers (CPF).  Our adjoining Thomas Kinkade Zionsville Gallery features one of the best selections by one of America’s most collected artists.

Displaying one of the most varied selections of custom picture frame options, we offer museum quality, hand-finished gold-leaf mouldings;  exquisitely stitched, leather covered, heirloom frames;  sleek, contemporary acrylic, no-seam frames in addition to basic black and everything in between.  You will receive exceptional design and meticulous workmanship in your custom framing from the full service gallery which offers customized shadow boxes, museum quality preservation as well as on-your-site installation.

The friendly, professional staff will assist you with on-site consultations for your home and office; locate and frame the ideal artwork; and provide complete installation upon request. 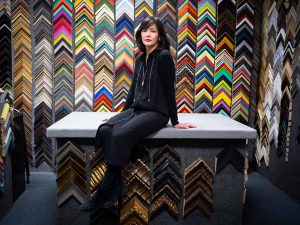 Barbara Jennings discovered her life-long career path in the art world in 1986 with the purchase of Corner Vise Frame Shop.  Art was always her favorite subject in high school.  After receiving her BA degrees in Psychology and Journalism from Indiana University, Bloomington and a couple of jobs managing a small business and working in an advertising agency, Barbara was lucky enough to have the opportunity to work with art.  Barbara received her certification from the Professional Picture Framer’s Association (PPFA) in 1988 and has an extensive history in art and framing seminars.  “I feel fortunate to be able to work in a field I am passionate about, and with people I enjoy – clients, colleagues and staff.  I naturally connect with people who have an appreciation for fine art and custom framing.”

Barbara, a proud grandmother, is the mother of three daughters who ‘grew up in the business’ and have all spent time working in the gallery.  She dreams of traveling the world to discover and bring a high level of emerging international artwork to the Indianapolis area. 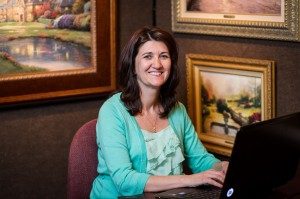 Rhonda Crawshaw came to CV Art and Frame (then Corner Vise Frame Shop, Inc) before the turn of the century after working in corporate America.  With a BS degree in Business Management and a background in marketing and customer service, she brings a wealth of experience to the gallery.   Rhonda has a keen appreciation for art and a natural eye for design.  She believes that art allows a person to view the world in new ways and allows us to examine ourselves from a spiritual and intellectual perspective.  Rhonda actively contributes to the Zionsville Cultural District, has won a prestigious Zionsville Chamber award and has participated in numerous charity fund-raisers including Habitat for Humanity, American Red Cross, Timmy Global Health and Cornea Research Foundation.  She is quick to lend a helping hand to anyone who asks and thrives on doing art searches for clients in order to find just the right piece of art to hang in their personal spaces.  Rhonda sees art as an investment in the future “…because if you care for your art, you can pass it on to other generations.  It doesn’t wear out like other household items you spend money on”.

Rhonda is a devoted mother and grandmother and enjoys quality time with her family. 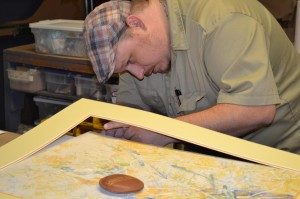 Jon Adamson, an integral part of CV Art and Frame as our leading custom framer since 2012, is certified by the Professional Picture Framers Association (PPFA).  Jon has always enjoyed working with his hands and began woodworking as a hobby at a young age.  Custom framing came as a natural progression of this hobby.  When asked what he enjoys most about his job, he will tell you that he enjoys the satisfaction of seeing clients’ enthusiasm when they view their completed projects.  Jon specializes in conservation techniques and is an advocate of protecting the items that people see as important to them, especially if they intend to pass them down to future generations.  He enjoys the challenge of unconventional designs like shadow-boxing, display cases and three dimensional objects.   Jon says, “You are not just buying a way to hang your art, you are buying furniture for your art.”

Jon also expresses his creativity as an avid musician and graphic arts designer.  He studied at Indiana University’s prestigious School of Music.

Jon is a devoted father, lover of languages and life-long learning.

Barbara brought a new level of distinction to custom picture framing in the Indianapolis area at surprisingly affordable prices.  Using conservation techniques, precision workmanship and an eye for design techniques that enhances artwork and memorabilia, Barbara developed a steadfast, loyal clientele who continue to utilize her services even after moving several states away.  The custom frame shop subscribes to the industry’s highest standards with certified members of the Professional Picture Framers Association.

In 1997 Barbara expanded into representing the in-demand artist Thomas Kinkade in the exclusive adjoining gallery.  This endeavor expanded rapidly with the Painter of Light’s popularity and a few mall galleries in Indianapolis ensued.  As the mall locations took Barbara’s attention away from the original frame shop, Corner Vise was taken over by Kim Smith who had been framing under her direction for 10 years.  During her 5-year tenure, Kim earned her Master Certified Picture Framer title, the highest certification in the industry.  After the economic challenges of the mid-2000’s Barbara closed her mall locations and returned to her art roots with Corner Vise in Zionsville. The timing coincided with Kim deciding to move out of state and relinquishing her ownership.

It soon became apparent that many galleries had not survived the economic downturn and left a need for original art.  Barbara determined that the timing was right for Corner Vise to redefine itself and bring quality original artwork to the collector  while developing a state of the art website representing nationally recognized published artists.

CV Art and Frame was chosen as a web-friendly name that keeps a flavor of the Corner Vise beginning. CV Art and Frame continues to bring you works from popular artists as well as emerging artists with expert custom picture framing. Some of the artists currently being represented include Peter Max, Maya Eventov, Victor Nemo, Nancy Noel, Alexandra Nechita, Dr. Seuss and Carlos Gamez de Francisco.

Nestled in the charming town of Zionsville, Indiana, bordering Indianapolis, Carmel and Westfield, CV Art and Frame is a short drive from Avon, Brownsburg, Noblesville, Geist, Lebanon, Greenwood and Plainfield.  You will experience true old world charm with original bricks on Main Street and original, period architecture in this historic village.  For more information about Zionsville, visit www.zionsvillechamber.org for current events, Sullivan Munce Cultural Center for historic data or Town Of Zionsville for government and community services.

Fox 59. The Art of Dr. Seuss Touring Exhibit to Make Stop in Zionsville. 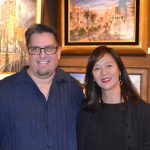 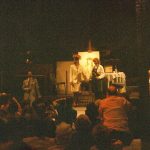 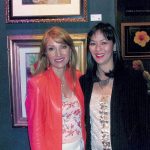 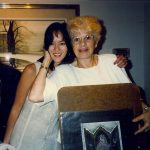 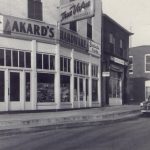 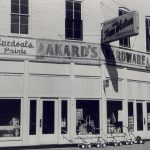 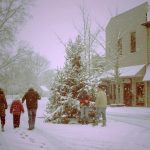 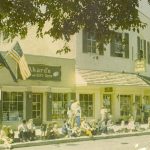 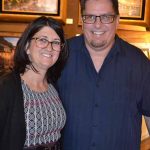 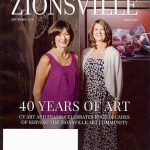 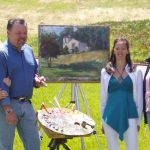 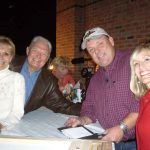 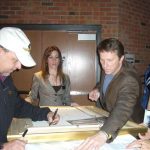 Thomas Kinkade with collector in Zionsville 2009 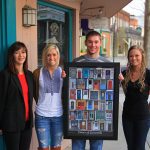