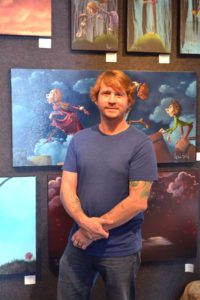 Gabriel Lehman was born in 1976 in Minot, North Dakota, moved with his family to Indiana and considers himself an Indiana native.

“How bad do you want it?”  Gabriel had to ask himself this question before walking away from everything in order to follow his true calling.  It became his mantra while working day and night, living out of his car, and painting on anything he could find.

While growing up in northern Indiana, Gabriel was seldom seen without a pencil in his hand.  Conceptual dyslexia made school an obstacle for him, but it also offered opportunities for the development of his creative side.  Since Gabriel struggled with traditional ways of learning, he was forced to lean on his problem-solving skills and his creative strengths.  All through school, he excelled in drawing but didn’t participate in other areas of the visual arts.

After graduating from high school, Gabriel considered attending college, but knew intuitively, that it was not for him and he took a job in construction.  After 14 years of working construction, 12 of which were in flooring, Gabriel’s joints made it clear that this was not his life-long career.  Desperate, he prayed that God would show him his path and he was led to his childhood roots and revisiting art.  Not feeling fulfilled with drawing, Gabriel picked up a paint brush and quickly realized he had discovered his gift.

Willing to leave everything behind in order to do what he felt called to do, Gabriel quit his job and fully committed to his newfound talent.  He would often work 20 hours a day, honing his skill and doing what brought him true joy.  In order to conserve money, Gabriel shut off his power and painted by candlelight. Shortly after, he ended up living out of his car and spending what little money he had on paint and brushes. While developing his skill, he applied the diligence that he learned during his construction years, a philosophy he follows in his work today.

His first real break came in December 2010 when he was invited to have a solo show at The Turchin Museum at Appalachian State University.  It was here that he met many world renowned artists and saw his future quite clearly and began living his dream.

Gabriel is a humanitarian by nature and uses his gifts to enhance the lives of  people across the country. From donating paintings for charity auctions to creating murals on homeless shelters and church nurseries, if he can help, he will. He sees the light all around him and brings this light into his work and, in turn, into the hearts of those who view it.

Several years after beginning his art career, Gabriel still paints like he is making up for lost time.   When asked why he spends such long hours in his studio, he replies, “it’s about how badly you want to live your life doing what you love and utilizing the gifts that God has given you.  And I want it badly.”