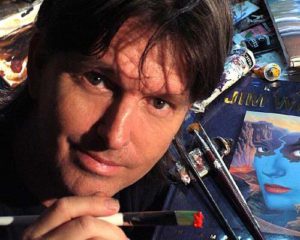 Born on November 24, 1949 In Long Beach, California, Jim knew, at age seven, he wanted to be a painter. However it would be several years before a pivotal event helped shape the developing, self-taught artist’s career: the day he picked up an issue of “Life Magazine” and discovered Salvador Dali.

Looking at Dali’s paintings in Life, Jim realized his own art could be anything he wanted it to be, and, while influenced by Dali, Norman Rockwell, Andy Warhol, Rembrandt, Magritte, Monet, Peter Max and others, he set out to further develop his own unique style of painting.

If you are not familiar with his name, you have undoubtedly seen his work. His fine art paintings and personalized portraitures have been commissioned by a clientele list that includes world-famous celebrities and prominent business leaders, and his collaborations with marine life artist, Wyland, are widely acclaimed. His paintings have been seen around the world on billboards, large outdoor murals, set props for TV shows, and Fine Art Galleries coast to coast now carry his works.

Jim has also illustrated over 200 book covers for major New York publishers, including titles from authors such as Arthur C. Clark, Clive Barker and Robin Cook. He has created collectible movie posters and magazine covers, numerous album and CD covers including the Grammy award-winning cover for Bob Seger’s album, “Against The Wind.”

In 1986, Jim was commissioned to create a painting for another gifted individual, world-renowned recording artist, Prince. Jim was given very limited information on which to base the painting other than a one-page sheet containing 13 instructions such as, “a fat man hugging a tiger,” “two men with hair shorter on one side, playing the tambourine.” Jim was instructed, “use your imagination,” which, of course, he did. Upon completion of the painting he was told that Prince loved it.

Jim has also created two books: “The Art of Jim Warren,” and “Jim Warren, Painted Worlds.” Both contain clear and colorful representations of his works, many of which combine, as Jim has stated, “the effect of the real mixed with a touch of the unreal, to make you feel as though you’re actually seeing something that in reality couldn’t possibly be. Although Mother Nature is my favorite art director, I do take artistic license to create environments of my own.”

The 90′s ushered in a new focus, that of the environment and saving earth. Jim painted “Earth…Love it or Lose it” which received critical acclaim and was featured on numerous magazines, billboards and shirts. It also became a popular visual representation for the global environmental movement. In the mid 90′s Jim began painting famous actors and incorporating celebrities and friends into his work referring to the works as “personalized paintings”. Jim painted Juliette Lewis, Wyland and Michael Parnell (CEO of Oakley Sunglasses) during this period. In 2004, Jim’s collaborations with Disney were released as fine art prints. Jim continues to paint Disney characters and his own unique interpretations of Disney characters to this day.In 2009 Jim began painting celebrities for the Fame-Wall project in New York and Hollywood (www.fame-wall.com), painting portraits and unveiling them with the likes of The Beach Boys, John Stamos, Kelsey Grammar, Kristen Chenowith, Brooke Shields and others. In present day Jim continues to expand on his work and create new worlds on canvas. When not in his studio Jim enjoys time with his wonderful family.

When questioned by an acquaintance concerning what aspect of his work gave him the most pleasure, Jim replied, “the letters and emails I get from people around the world who say they have been touched in some way by my paintings. The fact that my art can create an effect like that for some people, and act as a positive influence in their lives, means a great deal to me.”

Such is the Art of Jim Warren.

An Interview with Jim: