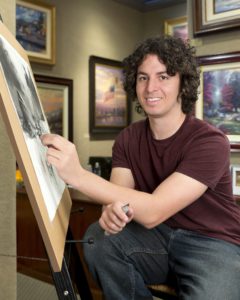 Thomas Kinkade’s nephew, Zachary Thomas Kinkade, was born in 1992 and has been passionate about art his entire life. Beginning when he was 11, Zachary began entering and winning national and regional art competitions and shows. Deciding that art was his calling, Zac submitted a portfolio to the Fort Worth Academy of Fine Art and was accepted to the school in preparation of formal university training in the arts. During this time, Zac also attended Tarrant County College to study art and most significantly began working with his “Uncle Thom” and apprenticing at the Thomas Kinkade Studios to explore his own aesthetic vision. Zac continued these relationships while attending Cornell University in Ithaca, New York, where he eventually graduated with honors from that academy’s prestigious School of Art and Architecture. During the summers in Ithaca, he illustrated for the underground magazine Kitsch and in his junior year was recognized by the Le Bal Gallery in France where his conceptual works on the theme of “War and Beauty” were accepted for inclusion into their prestigious annual publication La Topographies de la Guerre. Again, following in his uncle’s footsteps and in service of his own life as a painter, Zac now attends Art Center College of Design in Pasadena studying as his Uncle before him in this internationally known and highly ranked University. Zac has taken a position as a resident artist in the Thomas Kinkade Studios and will add his hand toward finishing the work and vision of his uncle and mentor, Thomas Kinkade, all the while creating his own legacy with pencil and brush. While his originals have been sought after by collectors for many years, 2015 marks the beginning of his publishing career.

STANDARD NUMBERED (S/N) The Standard Numbered Canvas is individually handhighlighted and numbered. Each canvas is hand-signed on the front by Zac and is available through Art Brand Studios and Authorized Galleries. Standard Numbered are designated with letters S/N during the numbering process.

GALLERY PROOF (G/P) The Gallery Proof Canvas is available in a small edition size and is individually hand-highlighted and can be distinguished by the unique gold foil Remarque stamped onto the image. Each canvas is hand-signed on the front by Zac and is available through Art Brand Studios and Signature Galleries only. Gallery Proofs are designated with letters G/P during the numbering process.

HERITAGE EDITION (H/E) The Heritage Edition Canvas is available in a very small edition size and created with a textured process that recreates the artist’s actual brush work. It is then finished by a Master Highlighter with additional highlighting. A special Zac Kinkade hand sketched Remarque is applied on the verso side of the canvas by a Master Highlighter. Each canvas is handsigned on the front by Zac and is available through Art Brand Studios and Signature Galleries only. Heritage Editions are designated with letters H/E during the numbering process

STUDIO EDITION (S/E) The Studio Edition Canvases are the most rare and are extremely low in edition size. They are created with a textured process and additional highlighting that recreates the artist’s actual brush work. Upon satisfactory completion, Zac will apply final highlights himself and hand sketch a detailed sketch and signature on the back of the canvas. Each canvas is hand-signed on the front by the artist and is available through Art Brand Studios and Signature Galleries only. Studio Editions are designated with letters S/E during the numbering process.