Llevame en tu Mirada (Take me into Your Eyes) by Gerald

Size 38″ x 48″. Framed, Original Mixed Media Painting.
Llevame en tu Mirada by Gerald is a beautifully textured painting of peacock feathers. Shimmery and exquisite, this artwork is almost sculpted in its creation melding blues, greens, turquoise and black into an exceptional modern piece of artwork.
CV Art and Frame has access to a comprehensive collection of artwork by this artist. For additional details, please contact us at phone #: 317-873-2976 or email: info@cvartandframe.com 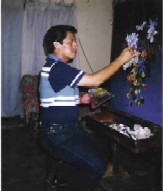 Gerald was born into a family of artists in 1963 in Ancash, Peru. His mother was a renown ceramist while his father was a painter. He studied at the prestigious Escuela Nacional de Bellas Artes de Lima under the direction of well-know masters like Milner Cajahuaringa and Miguel Angel Cuadros.

His awards include 1st prize in the “Arte Jove” contest and 3rd prize in the Hotel Crillon National Contest, both in 1989.