Candela’s trademark style of three dimensional artwork is depicted in this colorful painting with the images popping out of the canvas. 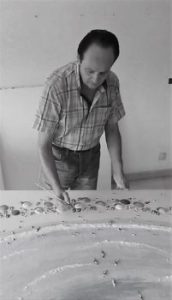