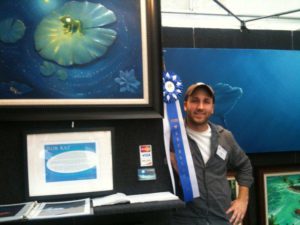 Rob Kaz grew up skating and surfing in New Jersey, not yet realizing he was destined to be a fine artist, despite his hobby interest in art. He enjoyed painting and drawing which he believed helped him to overcome shyness and to talk to girls, but seeking to escape the cold winters, Rob decided to attend college at the University of Central Florida. There he earned his degree in Criminal Justice, but would never experience a career in federal law enforcement.

While applying for jobs, Rob took what he thought to be a temporary position in an animation studio when the owner, who had seen Rob’s work in his parents’ home, offered him a job on the spot. Excelling immediately, Rob found himself working for a variety of small animation studios and alongside “quite possibly the most talented artists I’ve ever known” he says of Disney animators who remained in Florida after Disney closed their Florida-based animation studios, “Their influence was invaluable.”

In 2008 Rob worked as a character artist for EA Tiburon (Electronic Arts) where he created likenesses for Madden and NCAA Football games, combining his love of art, gaming and football.

Creating a home studio, Rob pursued his craft and new dream of building a career as a fine artist. Studying the works of his artistic idol, James Coleman, Rob began exhibiting at local art festivals and finding his own style. His love for using character and light to tell a story are evident in the details of his paintings.

“I want people to be happy when they look at my work, so I create stories that personally make me smile or laugh. But I also want people to notice the technical side of my paintings. I put a lot of emphasis on lighting, composition and color when I paint. I think all of these aspects ultimately play a factor in deciding the emotional outcome of a finished painting,” Rob says of his motivation, inspired by “places he’d rather be” and “friends along the way,” both recurring themes that have organically resulted in two aptly named collections of work.

Rob is appreciative of the many opportunities he has received in the art world, recognizing his fortune to have been granted the license to paint some of his favorite films in his own style. Disney, Pixar, Lucasfilm and Warner Bros. have all taken form on his easel and allowed his inner child and geek to pay homage to the moment.

Having been recently requested by this alma mater, University of Central Florida, to design and paint a club floor for the football stadium that will be seen in aerial shots during televised games, Rob says “I can’t tell you how cool it is. For years, I’ve attended UCF games and now, even if in a small way, I get to be part of the game. It’s amazing!” (go Knights!)

Rob Kaz Star Wars art is for sale at CV Art and Frame with access to a comprehensive collection of artwork by this artist. For pricing and additional details, please contact us at phone #: 317-873-2976 or email: info@cvartandframe.com