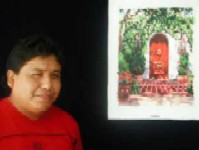 Altino Villasante is one of, if not the, world’s greatest, living watercolorist. An individual possessing a tremendous natural insight into his surrounding and environment, Villasante is an exceptional artist by nature, through pure intuition, he is the spontaneous creator of masterful works.

Every character study, every architectural painting and every harbor scene is a personal interpretation of life, of his surrounding and of his environment as seen through his eyes, totally void of academic influence. His exposure to other artists and the contemporary art movement has been minimal.

Villasante was born in 1965 in the poorest section of Peru, Puno. At the tender age of 7 he was taken to Lima with the expectation of migrating to the USA. He was not to realize this dream due to immigration issues and he remained alone in Lima, never returning to Puno, and stayed by himself as the sole occupant in the house for many years.

Villasante’s brush strokes show his character… strong and determined. He shows his candor and innocence through the paintings of children. The influence of his architectural studies is shown through his doors and boat renderings. His still-life works show his ability to relate the old traditional Peruvian culture with what is modern Peru. His portrait and character studies are evidence of his deep perception and understanding of life and of the individual.

Well known for his dozens of exhibitions in America, Villasante has also exhibited at the temple of modern watercolor, England. In February, 1999, Villasante exhibited, along with hundreds of other watercolorists, at the most prestigious watercolor exhibition in the world. The attention he received was impressive and surpassed his highest expectations.