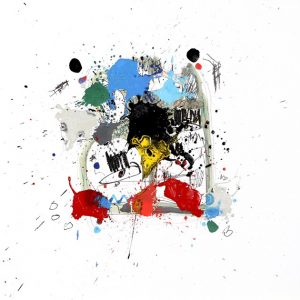 Picasso said “It took me four years to paint like Raphael, but a lifetime to paint like a child. Xavi Carbonell, also from Spain, seems to understand this quite clearly. Influenced by American artists Basquiat and Cy Twombly, Italian artist Saura and children from around the globe, Carbonell is creating Abstract Expressionism in a fresh, colorful manner, engaging and and uplifting the world.

Never titling his work, Carbonell leaves the viewer to determine their particular universe.

Tell us what you see in his work: gallery@cvartandframe.com

His work has been exhibited in galleries, museums and art centers. Arteinversión, Carmen de la Guerra (Madrid), THEMA (Valencia), the CADA (Alcoy), are examples. It has been present also in numerous international exhibitions, highlighting Dubai, Antwerp and New York .

He has been selected in numerous awards: XIII Painting Prize 2012 University of Murcia, the Third Biennial of Engraving Etching 2011 Valladolid, and in three editions of the Bancaja Prizes for Painting, Sculpture and Digital Art, in 2009, 2008 and 2006 as well as on I Alcoy Art Biennale, 1996.

His work is included in numerous public and private collections.