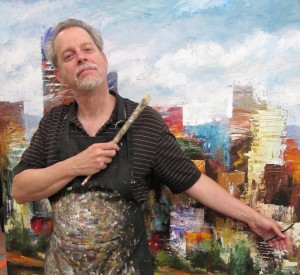 Bruce Marc Marion was born April 11, 1956 in the San Fernando Valley, California where he grew up and was recognized as an artistic talent at a very young age. With encouragement and support from his artistic father, Marion was accepted into an adult figurative oil painting class at the tender age of 8. Originally exploring expressionism in figurative works, Marion’s artistic endeavors have exploded into an array of subject matter.

Whether interpreting lush landscapes, dynamic cityscapes, the human form, or pure abstracts, Bruce Marion’s lyrical coloration and dramatic use of light and shadow lend his forms a distinctive glowing quality, as though they’re illuminated from the soul. Combined with his dynamic knife work, light and texture come together to ignite his works with an energy all their own.

His works on canvas express feelings and sensations, more than actual people and places.  “I don’t so much seek to portray a specific locale, as to capture a sensory memory of it – as though a camera could somehow photograph a space as seen through your emotions, rather than through your eyes.” It’s an idyllic, dreamy world that feels softly familiar. Marion explains, “I constantly hear people saying to each other, ‘Oh, doesn’t that remind you of when…’ as they view my work. And it’s a different recollection for everybody, but always a happy one! Really, it’s one of the most gratifying parts of being an artist.”

Marion received his BFA from the prestigious Art Center College of Design in Pasadena, where he studied with world-renowned artist Pat Nagel, and Lorser Feitelson, the father of Post-Surrealism. He has taught at the Otis Parsons Institute of Art in Los Angeles, as well as privately, and has received several grants to implement month-long art programs for Arizona elementary school students. Marion recently completed a major public commission for the new social sciences and humanities building at Sam Houston State University in Texas. He is a 2013 nominee for the Governors Arts Award for the state of Arizona.

Marion lives in Chandler, Arizona with his wife, daughter, dogs, and several cats.

Marion has painted the city of Indianapolis, featuring Monument Circle in a burst of expressionist color.