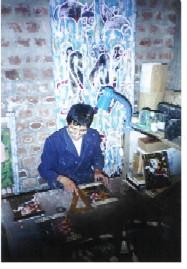 ADOLFO COLQUE was born in 1967 in Cuzco, Peru, in 1967. Since he was born into a family of artisans, a very young Colque was exposed to many cultural events that influenced him to develop a love for the arts.