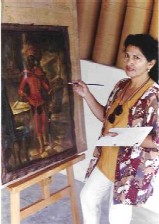 Diana Mendoza was born in Junin, Peru. Although she does not like to tell her age, she is probably in her fifties. Diana graduated in the sixties from the Escuela Nacional de Bellas Artes with one of the highest awards in the speciality of Painting and Drawing and, also, as Professor of Painting. She has worked as a teacher and as designer before devoting her entire time to painting. She is, also, an accomplished musician and mother of several children.

Diana has participated in several exhibitions, including: