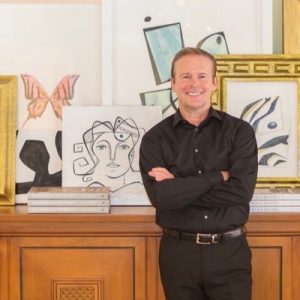 Steve McElroy (born April 14, 1958), is an American artist based in Dallas, Texas and New York City, New York. McElroy’s body of work includes over 800 oil paintings and over 1,250 drawings. McElroy was the only living artist chosen to release interpretations of Barbie alongside the work of Andy Warhol for the toy icon’s 40th anniversary in 1999’s The Artist Series by Mattel. His original oil paintings are owned by Rosie O’Donnell, Absolut Vodka, Mercedes-Benz, Madonna and other public and private collectors in the United States and other countries of the world. McElroy’s first painting was a 4 inch by 2 inch abstract “Jester” created in 1996, which hangs in the private collection of a Verizon Wireless marketing executive in Hoboken, New Jersey.

Steve McElroy was born in San Angelo, Texas. He received his BBA in General Business from the University of Texas at Austin in 1981. Following an eight-year partnership with the Texas billionaire H. Ross Perot from 1988 to 1996 called Total Top, McElroy sold his interest in the company and began to paint for the very first time at age 37. Since that time he has created a large body of original artworks in oil, pencil and Indian Ink. McElroy was severely beaten and robbed in a random mugging on a street in the Bedford Styvesant area of Brooklyn, New York in 2009. With no memory of the event, and after a full recovery, the pace of McElroy’s creation of art has since increased.

Steve McElroy spent his early years traveling to many Texas cities while his father Tom McElroy worked as a store manager for Sears. His mother Verna McElroy was a homemaker. McElroy’s parents and his sister Debbie and brother Tom finally settled in Abilene, Texas when McElroy was entering the 3rd grade. He would remain there until his 18th birthday, at which time he moved to Austin, Texas to attend the University of Texas at Austin. He did not study the arts while there. There is also no evidence that McElroy showed any inclination towards the arts in his youth. No artworks exist before McElroy turned age 37.

Upon graduation, McElroy remained in Austin, Texas and worked for the law firm of Clark, Thomas, Winters & Shapiro as their business manager. He is known to have attended the Pablo Picasso Retrospective at the Museum of Modern Art in New York City in 1980, a trip which greatly influenced him, although he only began to paint much later in 1996. He moved to Dallas from Austin in 1988 to begin his partnership with H. Ross Perot for a product McElroy had patented called Total Top. McElroy had written Perot a letter at his home, and Perot contacted him 4 days later. McElroy was subsequently profiled by the magazine Texas Monthly in June 1992 in an article called Ross and Me during Perot’s run for president of the United States. During this time he lived at various times in Miami Beach, Los Angeles and New York City. Other articles appeared with McElroy featured such as Money, Los Angeles Times and other publications. Although well-documented by these and other articles to be volatile at times, the partnership developed in McElroy a great respect for Perot’s business skills over time. McElroy worked closely with Perot, and McElroy credited him publicly for further cementing a belief that anyone can achieve anything they set their mind to do. It is after this partnership ended profitably in 1996 that McElroy picked up a paintbrush for the very first time. He has since created thousands of original artworks and remains active today, producing approximately 50 paintings per year, and many drawings. He staged his first art show based on his experiences with Perot from this time, also called Ross and Me.

Steve McElroy is noted among his collectors, now numbering over 150 people, companies or institutions, for his use of vivid colors and for using the finest materials. His paintings almost always portray positive imagery, and are largely culled from nature, music, and cultures of the world. His early work for Barbie for Mattel brought wide recognition, as his work was turned into puzzles and fine prints in a collectible series. These were sold worldwide by Mattel in the same packaging and displays with the Barbie created by Andy Warhol before his death in the 1980s. McElroy’s “Barbie” artworks are now collectible, and his “With Love, Barbie” original hangs alongside Warhol’s ‘Barbie” in a collection in Bel Air, California at the private home of former Mattel Chairman Jill Barad. Barad is often credited with building Barbie into the world’s best-selling toy brand. McElroy’s early “Barbie” works are often put up for auction on eBay and other sites for large prices.

McElroy always signs and dates his work. Each painting always carries his distinctive and simple signature of his last name, usually on both the front and back of the painting. They are virtually always titled on the back of each painting, although some are known to exist without titles. McElroy is known to use no assistants, and has insisted he will never do so as he feels it often cheapens an artist’s work. He creates all of his work entirely by hand with oil paint, hand brushes, fine pencil and Indian Ink. The majority of McElroy’s original oil paintings are believed to hang in New York City, Los Angeles, Dallas, Tampa, London and Paris. Large collections of his work are also known to hang in his home town of Abilene, Texas, including at The Grace Museum and in Hoboken, New Jersey.

After his foray into the mass market with Mattel alongside Warhol, Steve McElroy’s career gained prominence when he was chosen to create the art for an art-themed Sweeps Week Finale Season episode “Weekend in LA” for the Emmy-winning television show Mad About You with Oscar-Winner Helen Hunt. Rosie O’Donnell then acquired McElroy’s original “Rosie’s World” in 1998. Subsequently, Madonna and Carlos Leon acquired McElroy’s “The Ballerina and the Bear” for their daughter Lourdes Leon. Madonna and Carlos Leon also each own one other painting by McElroy. McElroy then completed the portrait of author and writer Dominick Dunne of Vanity Fair magazine. McElroy’s original paintings are also in the collections of Mattel, Inc., Absolut Vodka, Mercedes-Benz and the corporate headquarters of McDonald’s. Several of his private collectors are known to own over 30 original paintings in a single collection.

McElroy is one of only a few living artists represented by the same European company ARTMerchandising & Media AG of Munich, which also represents portions of the estates of Van Gogh, Dali, Cezanne, Rembrandt, Renoir, Michelangelo and other artists of the past. Steve McElroy is listed alongside these artists at ArtMerchandising & Media AG Website in their Portfolio page[11] and next to Parfums Andy Warhol at ARTMerchandising’s website in the slideshow of names.